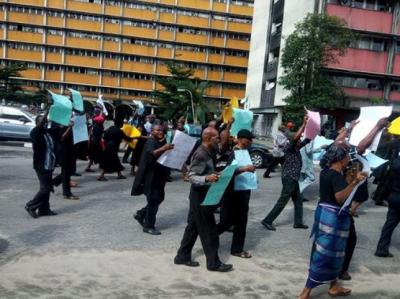 Pensioners in Rivers Sate have hit the streets again in demand of unpaid bebefits just barely three weeks after the Organised Labour and the Rivers government reached an agreement, which led to the suspension of a planned labour strike.

The pensioners, in their plea to the state government, said despite reaching an agreement to set up a-three-party committee to address their troubles, yet nothing tangible had been done.

The Secretary to the Nigerian Union of Pensioners, Rivers State branch, Joseph Agbo, who spoke on behalf of the senior citizens, said the pensioners had yet to know their fate concerning the unpaid benefits.

He said, “When we had a meeting, it was agreed that the issue of pension, including gratuity, non-payment of death benefits; all were included, but until this moment, we don’t know our fate. The committee the government said it will set up; up till now, they have not done it, nothing has been done.”

“We have written to the Secretary to the State Government, requesting an audience so that we can explain our problems because if you are not a pensioner, you would not know much about the problems we face.”

“But up till now, our letter is just there, they don’t care. The government has no regard for their fathers; that is why they have no regard for pensioners in this state.”