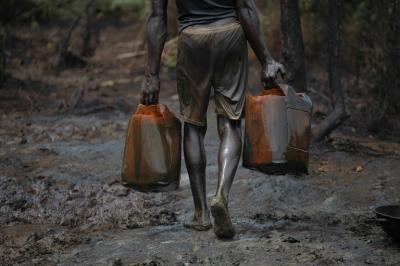 The Economic and Financial Crimes Commission, Port Harcourt Zonal Office yesterday disclosed that it has begun interrogating and investigating of 11 suspected oil thieves arrested in Rivers State by the Nigerian Navy.

It was gathered that the suspects were arrested and handed over to the EFCC on Monday, September 28, 2020, by the Nigerian Navy Forward Operating Base in the Bonny area of the state as a result of their suspected involvement in illegal oil bunkering.

The suspects were nabbed on September 22, 2020, alongside 320 drums of petroleum product suspected to be illegally refined Automotive Gas Oil (Diesel).

The EFCC Head of Media and Publicity added that a Principal Detective, Superintendent of the EFCC, Ani Stanley, has received the suspects on behalf of the Port Harcourt Zonal Head, Abdulkarim Chukkol, and expressed satisfaction over the collaboration existing between the Navy and the EFCC.

He however assured that a thorough investigation would be done.