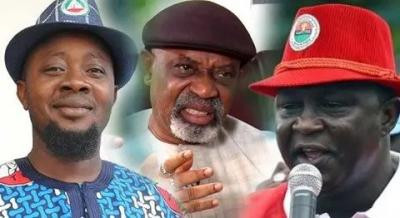 Nigerian Leaders of the organised labour around 2am on Monday succumbed to pressure from the federal government and shelved the planned nationwide strike over the increase in petrol price and electricity tariffs.

The leadership of the Nigeria Labour Congress (NLC) and the Trade Union Congress (TUC) had earlier directed their members to remain at home from Monday until their demands were met.

But following hours of negotiations during a meeting at the Presidential Villa Banquet Hall in Abuja which started around 8.30pm, officials of the organized labour called off the strike and asked their members to go to work.

Reading the communiqué after the meeting, the Minister of Labour and Employment, Dr. Chris Ngige said the parties agreed to set up a technical committee comprising ministries, departments, agencies, NLC and TUC, which will work for a duration of 2 weeks effective from Monday.

According to him, the committee will “examine the justifications for the new policy in view of the need for the validation of the basis for the new cost-reflective tariff as a result of the conflicting information from the fields which appeared different from the data presented to justify the new policy by NERC metering deployment, challenges, timeline for massive roll – out.”

He added that, “All parties agreed on the urgency for increasing the local refining capacity of the nation to reduce the over dependency on importation of petroleum products to ensure energy security, reduce cost of finished products, increase employment and business opportunities for Nigerians. “And to cushion the impacts of the downstream sector deregulation and tariffs adjustment in the power sector, the federal government will implement the following:

A specific amount to be unveiled by the FGN in two weeks’ time will be isolated from the Economic Sustainability Programme Intervention Fund and be accessed by Nigerian workers with subsequent provision for 240,000 under the auspices of NLC and TUC for participation in agricultural ventures through the CBN and the Ministry of Agriculture. The timeline will be fixed at the next meeting.

Federal Government will facilitate the removal of tax on minimum wage as a way of cushioning the impacts of the policy on the lowest vulnerable.

Federal Government will make available to organized labour 133 CNG/LPG driven mass transit buses immediately and provide to the major cities across the Country on a scale up basis thereafter to all States and Local Governments before December 2021.

Housing: 10% be allocated to Nigerian workers under the ongoing Ministry of Housing and Finance initiative through the NLC and TUC.

Consequently, the NLC and TUC agreed to suspend the planned industrial action.

Horse trading ahead of truce

Earlier, the organized labour took a swipe at the federal government over two recent court injunctions secured last Thursday and Friday restraining the unions and their affiliates from proceeding with the strike over the increase in petrol price and hike in electricity tariffs.

The Nigerian workers during a meeting at the Banquet Hall of the Presidential Villa in Abuja insisted that nothing will stop them from embarking on the indefinite strike but a reversal of the increases.

A similar meeting was deadlocked on Thursday, even as the parties agreed to meet today in order to deliberate further.  However, after realising that the labour unions have resolved to go on with the strike today, officials of the federal government engaged them last night but nothing fruitful came out of the meeting.

During the meeting, Ngige first appreciated labour leaders led by NLC President Ayuba Wabba and his counterpart from the TUC, Quadri Olaleye, for attending the emergency meeting. He later stirred the hornet’s nest by saying there were court processes ordering the organised labour not to embark on strike.

Ngige had said, “At our last meeting, which the press described as deadlocked, I don’t think it was deadlocked. I made it clear that we put something on the table and labour centres said they will go and fine-tune those proposals to suit their own needs.

“And in between that, there were some other developments. A judicial process was served on us by a CSO asking us as defendants to make sure that there is no strike. So, we felt that because of those issues, our date for us to reconvene tomorrow was no longer tenable.

“I therefore contacted the head of the two labour centres and the SGF and the Chief of Staff to the president and we all agreed that we need to talk and dialogue as soon as possible. That necessitated our invitation which was very urgent.

“I don’t think we will waste much time, we know where we stopped last time. So, when we go into the interactive session, we will take some quick decision that will enable both parties to know that this reconciliation process is temporarily at an end of a stanza.”

But angered by Ngige’s remarks, the NLC President, Wabba warned the minister not to talk about the court orders if there would be headway during the emergency meeting.

The labour leader, however, described the court orders as rumours, adding that they were not afraid to go to court to challenge any injunction if it was real.

Wabba said, “We are here again because when we met here on Thursday, we could not conclude the discussion. First, is the fact that the government presented their positions, we also presented ours. Therefore, it was concluded that there was a need for consultation and the meeting was adjourned till Monday.

“As you said this particular session was conveyed under emergency circumstance because all of us are committed to social dialogue that is why we are here. Some of our colleagues missed their flights and so they could not join us.

“I think it is good for me to respond to one or two issues. One is the judicial process that the honourable minister of labour mentioned. Let me say clearly, that as we sit here, labour has not been served any process.

“Let us not forget that because, we, labour unions, are passionate about this issue, particularly the hike in electricity tariff. Remember we had to seek judicial pronouncement and as I speak here, there is still a subsisting court judgement…The Federal High Court in Lagos that said the increase is illegal.

“Therefore, it should be set aside. I am not sure that judgement has been respected up till today; I am not saying because of that if there are clear-cut issues we cannot proceed. I think we must also understand the context. If we are on the negotiation table and we have come to the table with open minds and the commitment, I think we should emphasise the issues that are on the table instead of trying to divert our attention by referring to a process, which we are not known to it.

“I think we shouldn’t bring some of those issues to the table because I thought we are here to make resolutions. As usual, it is out of our commitment that despite that today is Sunday and we are here to see how to resolve those issues.

“Once again, we are here because we are passionate about the issues. We want a situation where those concerns will be addressed,” he said.

“FG Insincere for Going to Court”

Corroborating his NLC counterpart, the TUC President, Olaleye described the FG as insincere for heading to court while still calling for negotiations.

Olaleye said, “We accepted to be here because it is the culture of labour that whenever we have issues with any party, we always focus on resolving the issues, and why we find ourselves in this situation is because we have been calling the government’s attention to all those things but the government is not giving attention.

“So, I want to appreciate the government for coming to the table to dialogue with us, and giving us the attention that we required. I think we have a stake in this country too because I have mentioned in the past that if we are part of the country, the government would have listened to us earlier before now.

“It was very wrong for the government, if another person has sponsored that, it could have been right. We actually got the information that they were being sponsored by the government,” he said.

Earlier, the SGF Boss Mustapha had appealed to labour to be patriotic by accepting palliatives government brought to the table. Mustapha said, “When we met last week Thursday, we had a very robust discussion. We had very good insights into issues that necessitated minister of labour to engage with the organised labour as to navigating through the agitating issues.

“I believe strongly that we have resolved virtually everything that was on the table in the area of deregulation of the downstream sector of the oil and gas and the increase in the pump price.

Decisions on petrol, electricity taken at the wrong time

The Speaker of the House of Representatives, Femi Gbajabiamila, on Sunday met with the leadership of the NLC with a view to averting the planned strike.

Gbajabiamila said the mediation by the House came at the last minute because he had assumed that the earlier talks between the labour and the ministry of labour would yield some result.

He commended the labour unions for being the watchdog of the government and the society as well as for protecting the common man and the workers.

He, however, appealed to the organised labour to consider its stance in the interest of the nation, “especially at this time when the government is trying to address some critical challenges caused by the COVID-19 pandemic on the nation’s socio-economic development of the country.”

He said when the government was shut down, “the people we seek to protect invariably end up holding the short end of the stick. So, it ends up defeating the purpose.”

According to him, “We, the leadership and the House of Representatives are on the same page with you. But what is the consequence, and that is the bigger picture of going on strike. This leadership of the house share your thoughts, we share your philosophy with regards to the workers’ plights.

“So, how do we move forward, how do we progress and achieve the result we want without hurting the common man.  The good thing is that this agitation is coming at the right time in the sense that I believe in the next couple of weeks or less, the budget will be presented. Many of these things have a lot to do with the budget,” he said.

Gbajabiamila had also met with Vice President Yemi Osinbajo, over the planned industrial action and protests by labour unions.

Osinbajo and Gbajabiamila were joined at the meeting by the Secretary to the Government of the Federation, Boss Mustapha.

“FG & LABOUR reached agreement at 2:53am. Deregulation to stay as Govt rolls out palliatives for labour (details in 2 weeks); Electricity tariffs suspended by Govt for 2 weeks with a joint Committee headed by @fkeyamo to examine the justification for the new policy. Strike suspended.”

Find below details of the agreement reached.

lsmail Saheed Dipo said:
NLC is a fraud
Leave your comments below: