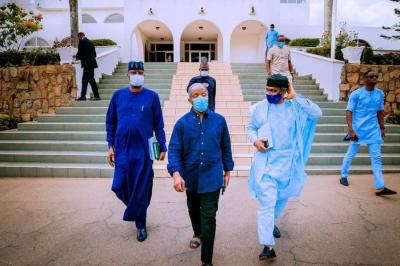 The Speaker of the House of Representatives, Femi Gbajabiamila, on Sunday, met with Vice President Yemi Osinbajo, over the planned industrial action and protests by labour unions scheduled to commence on Monday.

Osinbajo and Gbajabiamila were joined at the meeting by the Secretary to the Government of the Federation, Boss Mustapha.

The meeting, which was held at the official residence of the Vice-President inside the Presidential Villa, Abuja, came a few minutes after Gbajabiamila had met with labour leaders at the National Assembly complex.

After my meeting with Labour I met with the VP and SGF. We had fruitful discussions and I am hopeful tomorrow’s strike will be averted