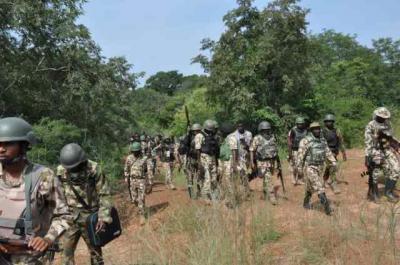 In continuation of the aggressive clearance operation to stamp out banditry and other criminal activities in North Central zone of the country, the Defence Headquarters (DHQ), on Saturday, said that troops of Operation WHIRL STROKE and 117 Guards Battalion have search a kidnappers’ Camp in Nasarawa State, killing two bandits and rescuing three victims.

This was contained in a statement made available to newsmen in Abuja by the Coordinator, Defence Media Operations (DMO), Major General John Enenche who explained that the operation was executed on Wednesday by the troops while on joint clearance operation around Mararaba Udege in Nasarawa State.

He explained, “in the course of the operation, three kidnapped victims were rescued while two kidnappers were killed in action while rescued victims have been reunited with their families,” adding that in another development, following credible intelligence on the possible regrouping of some elements linked to late Gana at a hideout around Kwaghaondo village in Chanchanji council ward of Takum Local Government Area of Taraba State, troops of Sector 2 conducted a dawn search operation at the identified hideout.

His words, “the gallant troops made contact with the armed militia elements who opened fire and fled as troops closed in on their position

“Troops swiftly responded with superior firepower which led to the killing of two bandits while one AK 47 rifle, one magazine and 15 rounds of 7.62mm Special ammunition were recovered.”

Gen. Eneche who said that following this development, the troops have continued to dominate the area with aggressive patrols and ambushes to deny bandits freedom of action, thereby assured that the Armed Forces of Nigeria and other security agencies remained committed, resolute and determined in curbing the activities of insurgents, bandits and other criminal elements in the country.

He however charged members of the public to continue to provide timely information on the activities of criminals in their various localities to the nearest military and other security agencies location for prompt action.

BREAKING: Speaker House of Reps threatens not to sign budget without provisions for victims of SARS,...
Read More...