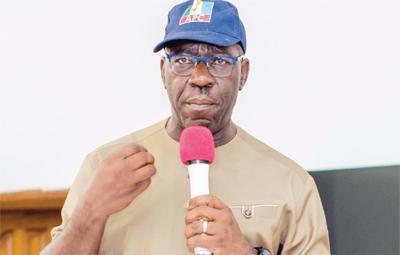 The Minority Leader of the House of Representatives, Rep. Ndudi Elumelu has congratulated Governor Godwin Obaseki on his re-election by the people of Edo state.

The Minority Leader, in a statement on Sunday described Governor Obaseki’s re-election as well-deserving given his sterling performance in developing the state and empowering the people during his first tenure.

The lawmaker also praised the people of Edo state for the courage they exhibited in coming our enmasse not only to vote but also to protect their votes and monitor the process to the end.

The Minority leader applauded the Chairman of the South South PDP Governors Forum, Governor Ifeanyi Okowa for the leadership role he played towards the success of the election.

The lawmaker also commended Governor Nyesom Wike, the chairman of the PDP National Campaign Council, Governor Seyi Makinde, as well as other PDP governors, the PDP National Assembly Caucus, leaders, elders and teeming members of the party in Edo state, the South South zone and the nation at large for their roles in upholding a free, fair and credible electoral process in Edo state.