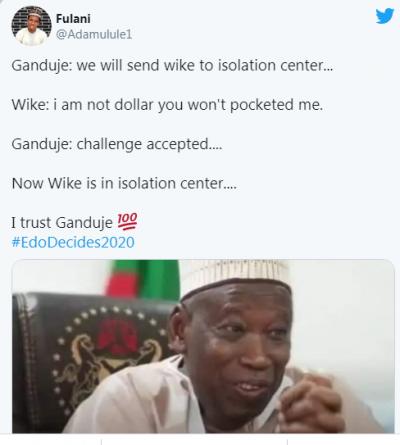 Governor of Kano State, Abdullahi Umar Ganduje is currently on a back-to-back hit with Rivers State Governor Wike Nyesom as they both take to the Twitter handles to debate on the current happenings in Edo state and some Nigerians have linked the debate to Ganduje’s previous threat to Governor Nyesom Wike.

The hashtag, #Ganduje has gathered over 6,000 tweets.

Note that Ganduje had earlier threatened to send Wike to an isolation centre during a political splutter over Obaseki’s switch from APC to PDP.

Ganduje said  the Governor of Rivers State, Wike will be isolated after the election as he swore to secure victory for APC’s Osagie Ize-Iyamu.

He  expressed believe that the reason why the Peoples Democratic Party (PDP) is in support of  Godwin Obaseki is due to its interested in Edo State’s treasury.